Ann Trout Blinks (1928-2004) graduated from Oklahoma State University (1950) in social science and journalism. The wife of Stan Blinks and the mother of two children, she dedicated herself to her family as well as to journalism. For 43 years she worked for various newspapers, the last 25 for the Centralia Chronicle, for which she became a prize-winning reporter and editor. Talented and highly organized, Ann was active in numerous community organizations, including the Chehalis United Methodist Church, St. Helens Club, P.E.O Sisterhood, Centralia-Chehalis Zonta Club International, Sacajawea Guild to Mary Bridge Hospital, Evergreen Playhouse, and the Lewis County Historical Society. A 54-year member of the Lewis County Branch of AAUW, she served as president for three terms (1965-1968) and managed branch publicity for nearly three decades. 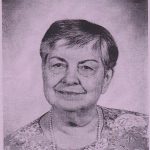 Recipients of this scholarship include: